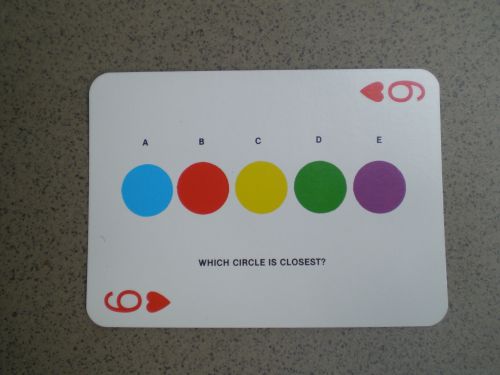 Last summer, my father was diagnosed with posterior cortical atrophy, or PCA, a rare progressive degenerative disease which affects the visual center of the brain. A person’s sight gradually declines to the point of functional blindness and ultimately his or her visual memories erode. Up until last summer, I had no idea that there was a visual type of dementia. I had never thought much about all the different functions our brains normally perform effortlessly without our conscious control. The more I learn about how complex the human body is and how refined all the pathways that control life processes are, the more I marvel that we are able to do anything at all. If I had PCA, one of the saddest losses for me would be to lose the ability to respond to colors. 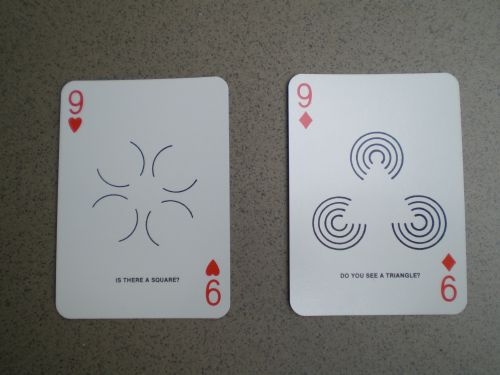 Our brains love to fill in the blanks and have a remarkable ability to provide missing information gleaned from previous experience. This deck of cards would not be an appropriate gift for a person with PCA. Though the eyes remain healthy, the brain can no longer accurately interpret and process the constant flow of visual information. Imagine not being able to recognize everyday objects or the faces of people you know, not being able to read, not being able to reach and grab the cup of coffee on the table in front of you because you are unsure of how far away it is. One of the most bizarre problems my father has is called simultanagnosia. Let’s say there is a donut, a napkin, and a cup of coffee on a table in front of a person with simultanagnosia. Looking at the table, he notices there is a cup of coffee and a napkin but doesn’t see the donut. He hears a familiar voice and turns his head in the direction it came from. A minute later his gaze returns to the table. Where is my cup of coffee? And where did that donut come from? Now he sees the donut and napkin but can’t locate the cup of coffee to take a sip. As I get glimpses from time to time into the strangeness of his condition, I am impressed at how my father keeps his cool with all the vanishing and reappearing of objects he is confronted with daily. Talk about having the cards stacked against you.

PCA is very rare, affecting one in twenty people with dementia according to some sources, and there is a paucity of research on the disease. There is no evidence that PCA is hereditary like early onset Alzheimer’s disease, but it is a potential worry on the radar that I usually do a good job of not feeding. But still. From time to time, I think that it would do me good to take up drawing as a hobby to build up some more “muscle” in the visual center of my brain. Earlier this summer, I finally bought pencils and a small sketchbook with the idea of making a quick drawing of the cup of coffee I drink each morning. On June 23, I made one atrocious pencil drawing of a coffee cup that resembled a fighter fish with the eyes of a frog swimming in a bowl. The notebook has been collecting dust on my desk ever since. Guess I will stick to playing the foreign languages, yoga, and meditation cards – all activities that may reduce your risk of dementia.

What else is in the cards? Autumn has already entered stage left. It is noticeably darker in the evenings and I need more sleep. I also feel the urge to do more breathing exercises when I practice yoga. The knitting needles are no longer idle as cooler early mornings and nights gently remind that the wool and alpaca season is coming soon. Have you felt the change of seasons yet?

May the cards only be stacked in your favor!

The Unbearable Heaviness of Books 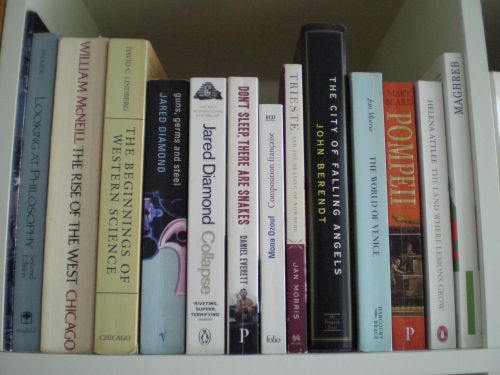 Fragment from a recent dream: I discover two Vintage International paperbacks lying on a table, one of Thomas Hardy’s The Return of the Native and one of his Tess of the d’Urbervilles. I comment on how I enjoyed reading both in my 12th grade English literature course (which is true) then wake up.

I have been obsessed with books lately, yet not in the normal bibliophile way. An avid reader since the age of 4, I have always been drawn to the printed word, and the feel of a book in my hand is second nature. My first dollars were earned shelving books at the public library; my next job involved bibliography searching and cataloguing new books in a college campus library before I moved into retail and worked at a used bookstore while finishing my studies and deciding What Next.

This recent obsession with books, however, is different. Though I do not actively collect books, I am a book magnet – and the attraction is mutual. They appear in my wake, congregate on the coffee table, wait for me to pick them up, turn their pages, absorb the wisdom they have to offer.  When I visit a person’s home for the first time, I am inevitably drawn to the bookshelves, my eyes narrowing and shrewdly assessing the book situation. I read an interview with Brazilian writer Paulo Coelho in which he said that he keeps his books in closed cabinets so visitors do not know what he reads. A bit paranoid, perhaps, but the paper company we keep is indeed revealing.

For the past year or so, I have been trying to free myself of material and mental ballast. We need so much less than we think we do. I practice yoga because it helps me experience a feeling of lightness and spaciousness within my body, a sensation I associate with health and well-being. I have been trying to create a similarly unencumbered space in my home by removing excess things. Since books are the category of objects I have the most of, I have been working on radically reducing their number. 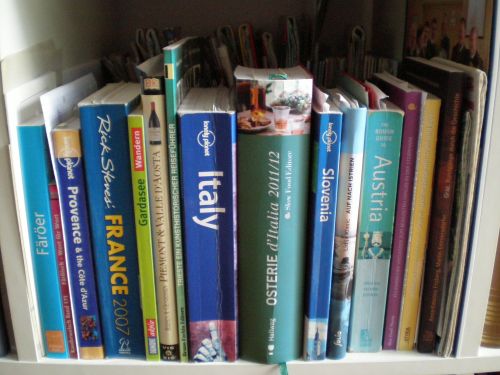 At one point in the past year, I decided to employ a different tactic than choosing what books to get rid of. Instead, I told myself I could keep one book for every year of my life. Out of the several hundred books on my shelves at that time, I only found 25 that I deemed important enough to carry close to me the rest of my life – with a comfortable margin for this core collection to grow! This exercise made me see how I view many of my books as temporary companions and has helped me loosen my grip on and let go of dozens of others.

I have come to realize that the books we place on our shelves represent projections of who we wish to be. It is a good practice to periodically reexamine what dreams are staring down at us from the shelves and potentially weighing us down with unrealistic expectations – and then take appropriate action. The shelf above, for example, constantly scolds me for doing nothing to make good on my wish of learning Polish and Russian well enough to read literature. Yet this wish was formulated in a past that no longer has much of a connection to my present. Isn’t it enough that I can already read books in three foreign languages, I plead with the Polish textbooks, who respond with stony silence and disappointment at my audacity to reject More and be satisfied with Enough.

May the books on your shelves be supportive and not reproachful!

A Castle with Peacocks

The novels of Thomas Hardy tend to start and end with a character traveling along a road. I thought of this each time I ventured outside the castle in Franken, Germany, where I spent last week doing yoga and watching peacocks. During one of my walks, I sat down at a crossroads along the approach to the castle, pausing and wondering which way I should go next.

Paths converge and diverge. The road that rises up to meet you might lead you farther afield. Doors and gates that open and reveal secret gardens and other enticing sights may suddenly close with a bang behind you, blown shut by the mischievous wind. How many times did I walk by the castle’s vegetable garden, wondering when the splendid ruby Swiss chard would land on my dinner plate? After several days of fervent wishing, I was finally treated to a delicious chard quiche for lunch. 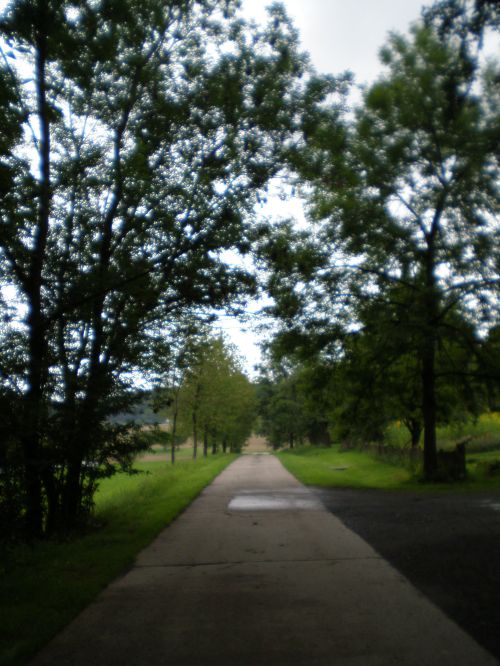 As you approach the castle, wheat fields give way to an orchard and the vegetable garden before you enter a long avenue sheltered by trees. Each time I looked down it in the direction of the outside world, I heard the sound of horse hooves and saw a coach rapidly approaching the castle. What was it like to arrive here in centuries past? What went through the mind of poet, translator, and professor of Asian languages Friedrich Rückert as he came for a visit in the nineteenth century? 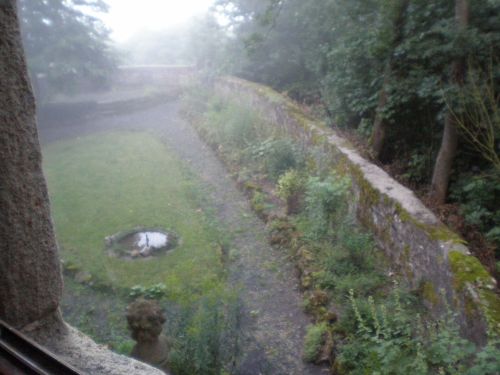 The rain created a rather dreamy atmosphere. One morning I looked out my window at the back courtyard and was greeted by mist rolling in. Unlike in the Middle Ages or Renaissance, it was warm and dry inside. I loved walking up and down the spiral staircase, which was housed in a tower and whose wooden steps delighted my bare feet. The many windows let in ample light, and there were flowers and statues and other treasures to discover on every windowsill.

The most fascinating sight, however, was the peacock show, performed live every day all day. Like with storks, my appreciation of peacocks dates back to my years in Poland, where I enjoyed watching them strut around Lazienki Park in Warsaw. Schloss Eggenberg here in Graz is also populated by peafowl (peacock just refers to the male; a female is technically a peahen). The main castle courtyard is the home to two males, two females, and five chicks. While I knew that peacocks can fly and like to hang out in trees, I had never seen a peahen with her chicks. When the chicks are two weeks old, they are able to fly and huddle under their mother’s feathers during the night, when peafowl roost in trees to protect themselves from predators. The chicks I observed were all old enough to seek shelter in the branches of a tree.

There are two species of peacocks, the Indian peacock (Pavo cristatus) most commonly encountered in the zoos and parks of Europe and the green peacock (Pavo muticus). Whereas the Indian peahen is a dull brown so as better to camouflage herself and her chicks, the Indian peacock is the Prince of the avian world. Instead of purple velvet and lace, he sports shimmering blue feathers, zebra striped feathers, scale patterned feathers, feathers with a round pattern reminiscent of eyes called ocelli, and tan feathers – at the same time. This crazy color combination is all about looking pretty to attract the opposite sex.

Then there is the peacock’s call. When a peacock cries, I am struck by the same sense of joy and urge to smile as when I hear a Canada goose honk. Wake up, open your eyes, notice the beauty around you, the peacock says. Since it is the national bird of India, it seems appropriate that my week of yoga was accompanied by these representatives of the pheasant family. I had the luck to spy a feather with an ocellus in the courtyard.

Keep your eyes open for a beautiful feather of your own!