It started snowing last night in the city, more cosmetic than anything else. The street and pavement are clear, but the plants and roofs are coated nicely. It is a very peaceful backdrop to the genesis of my first blog entry in 2018. Energized after a peaceful break over the holidays, I did what many a knitter does in January: assess all the unruly yarn that has accumulated and see what I can do to tame the leftover skeins. Having turned most of the larger balls of yarn into hats a few months ago, I decided to conjure up bags and containers and a sachet. The two larger baskets still need to be felted.

It is amazing how much you can make out of small bits of yarn. When I started knitting, someone told me to save all the scraps, no matter how small, and I have. After nine years of knitting, I have quite a collection. A week ago, I went on a word fast for 24 hours: no phone, no books, no computer. One of the many benefits that emerged from this fast was an impromptu organization of all those loose ends. After emptying the ziplock bag full of yarn ends (which no longer seals) and corralling all other leftover wool in my stash, I divided the ends into three categories: 4 inches/10 cm or shorter, medium lengths that could be used as ties of some kind, and longer pieces of yarn that could be wound into mini-balls and still be used for knitting. 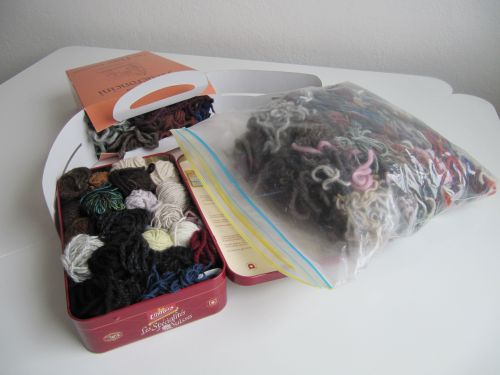 The ziplock bag is now full of the 4 inch or less ends. So nothing goes to waste, I plan on using these ends to stuff a small pillow that I will knit at some point in the next few months. (Family and friends: anyone want a 7″ x 9″ pillow?) The tie length yarn is organized by color and put in the cardboard container shown above. And the mini-balls of yarn that could still become part of a collaborative effort are neatly placed in a tin (which now closes easily, without me having to push down hard on the lid). Invigorated by this action, I knit nearly a project every day in a frenzy of industriousness that Benjamin Franklin would surely have found laudatory: “Be industrious and frugal and you will be rich.”

Industry and frugality are the catchwords for January and extend into the kitchen. Over the holidays, I found my groove again with cooking and baking, two activities that were more of a chore than a joy in 2017. January is a good time to look at the best by/expiration dates on dried goods and use them up. A large pack of raisins inspired me to bake a Gugelhupf, to which I added a shot of Italian wine and two teaspoons of cinnamon to jazz up the basic buttery yeast leavened dough. The recipe called for a glaze of rum and powdered sugar, neither of which I had in the pantry. Now I can look out the window at the snow while I eat a slice – that is enough powder for me.

May you enjoy the fruits of industry and frugality on the needles and in the kitchen!